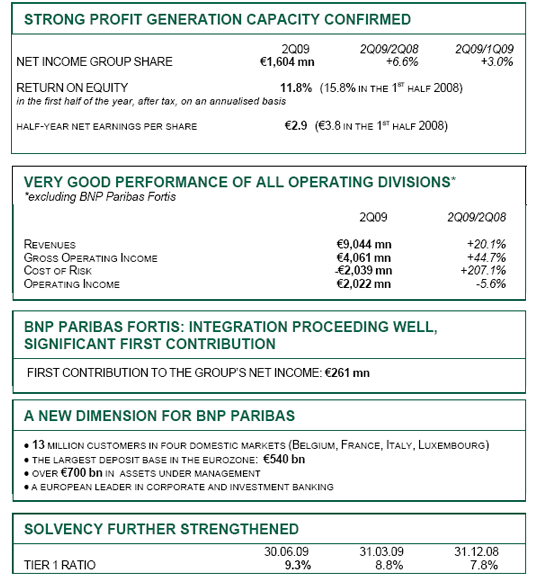 On 3 August 2009, the Board of Directors of BNP Paribas, in a meeting chaired by Michel Pébereau, examined the Group’s second quarter results as well as the first half financial statements.

In an environment characterised by a continued deterioration in the economy and a gradual normalisation of the markets, BNP Paribas Group again had a solid performance, generating a net profit (group share) of 1,604 million euros, up 6.6% compared to the second quarter 2008 and up 3.0% compared to the first quarter 2009.

This strong profit generation capacity is due to the very good operating performance of all the divisions despite a high cost of risk, in line with its level in the first quarter of the year.

Despite a still challenging economy, all the Group’s divisions continued to expand their businesses and made a positive contribution to the Group’s performance. BNP Paribas thereby demonstrated the robustness of its integrated banking model in a challenging environment.

View the Slides of the presentation

The bank for a changing world